Should I learn Farsi or Arabic?

If you want to learn Farsi or Arabic but haven’t decided yet, don’t worry, we will help you make up your mind, let’s get started.

First of all, you should define your goal of learning the language and based on your answer you will know which one to learn.

If you want to know which one is easier to learn and which offers better job opportunities then keep reading.

History of the Arabic language. 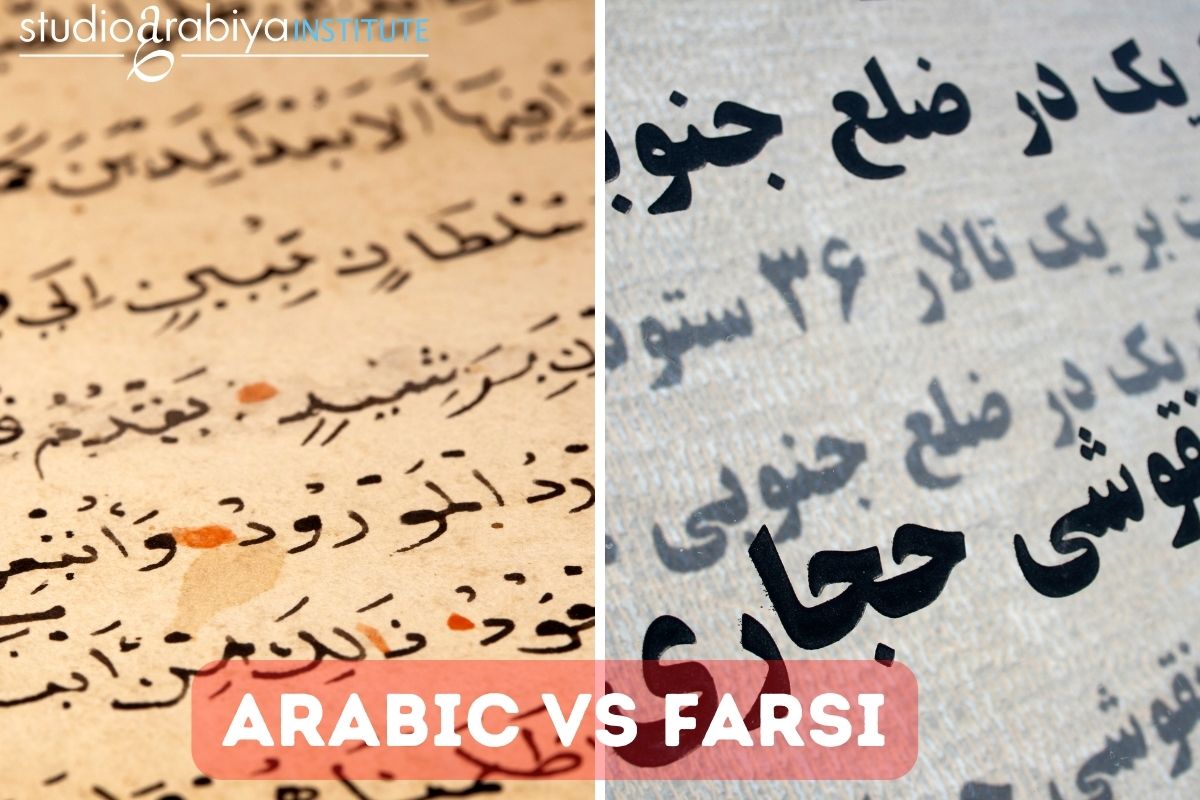 Arabic is an ancient language, it dates back to at least 1,500 years, it is a really old language that affected the whole world.

Arabic is one of the Semitic language families that emerged in the northwest Arabian Peninsula. No one really knows when it started but the clue of its appearance goes way back to the 8th century BCE. Many changes happened to the language over the years, a man pat of this change was in the 3rd and 6th century AD.

Nowadays due to the internet and globalization, the Arabic language is once again spreading around the world. Also, more Arab students are going abroad for scholarships, which helps spread the language even more.

What is modern standard Arabic?

It is commonly used in contexts such as writing, TV and radio broadcasts, formal interviews, speeches, and official letters.

It is similar but easier than classical Arabic.

Native Arabic speakers usually do not make a clear distinction between the two Arabic languages, but few are fluent in the latter.

Modern Standard Arabic was deliberately developed in the early 19th century as a modernized version of classical Arabic.

It was promoted by the pan-Arab anti-colonial movement that emerged at the time as a medium of communication that united all Arabs, regardless of country of origin or religion.

Arabs often use a combination of slang and MSA. For example, interviewers typically use MSA to ask prepared questions or make prepared remarks, then switch to colloquial variations to add instant comments or reply to questions.

Arab leaders give speeches in MSA and resort to colloquial Arabic to make a point or simplify an idea to illiterate citizens.

Another reason is most native speakers of Arabic cannot maintain speaking MSA for an extended period of time and resort to colloquial Arabic because that`s what they are used to in their daily life.

Modern Standard Arabic is the official language used for teaching at schools. It is also the Arabic that is used to write anything formal like work reports and so on.

History of the Farsi language.

The Farsi language is an Indo-European language that is spoken in Iran, Afghanistan, and Tajikistan. The number of people speaking it is about 110 million.

Which one is easier to learn Farsi or Arabic?

To answer this question let’s compare the two languages.

While the Arabic language have many dialects that differ from one country to another and learning one of them doesn’t mean that you can speak with the people in all the other countries. Therefore, before learning Arabic you should first decide which dialect to learn.

When it comes to the pronunciation Farsi takes time to learn, and there is what is called Persian script which is borrowed from the Arabic language, it will take time from you to learn.

Arabic has some sounds that English doesn’t have: like the letters ق and خ, but it’s not that hard to learn.

The Arabic alphabet and pronunciation: the pronunciation of the alphabet and its writing changes depending on where it is in the word. Plus, it’s completely different from the English alphabet. Perhaps that’s why people say that Arabic is a hard language to learn.

therefore,Farsi is easier to learn than Arabic.

If you want to learn the language to have better job opportunities then Arabic is your language. Today the US government agencies are searching for Arabic speakers; if you can speak it then you will be an excellent candidate.

Besides that, you could work in one of the Arab countries like Emirates in different fields like engineering, medical, and business.

One of the top 5 spoken languages in the world is Arabic, and only one percent of US universities study Arabic, if you learn it you will get many job opportunities and excel in them.

In the end, if you still have any questions visit our website Studioarabiyaeg.com