Should I learn Arabic or Chinese? A Helpful Guide to Decide

Should I learn Arabic or Chinese?

We always hear people say that Arabic and Chinese are two of the hardest languages to learn especially for English speakers. But why is that? And which one is better to learn? Let’s find out.

Here are some questions to ask yourself to figure out which one to choose Arabic or Chinese:

1-     Why do you want to learn the language? to travel, to connect with people around the world, there are many reasons, and you should define yours.

2-     Is the language hard to learn? If this is the first language to learn you should start by learning an easy one that is similar to your language.

3-     do you find the language interesting to learn? If you like the language and have a goal then you will find what motivates you and help you keep going. But if you choose a language just because people tell it’s the best one to learn you will feel bored in the middle of the way.

Now, let’s learn more about each one of the Arabic and Chinese languages.

What are the hardest languages to learn? 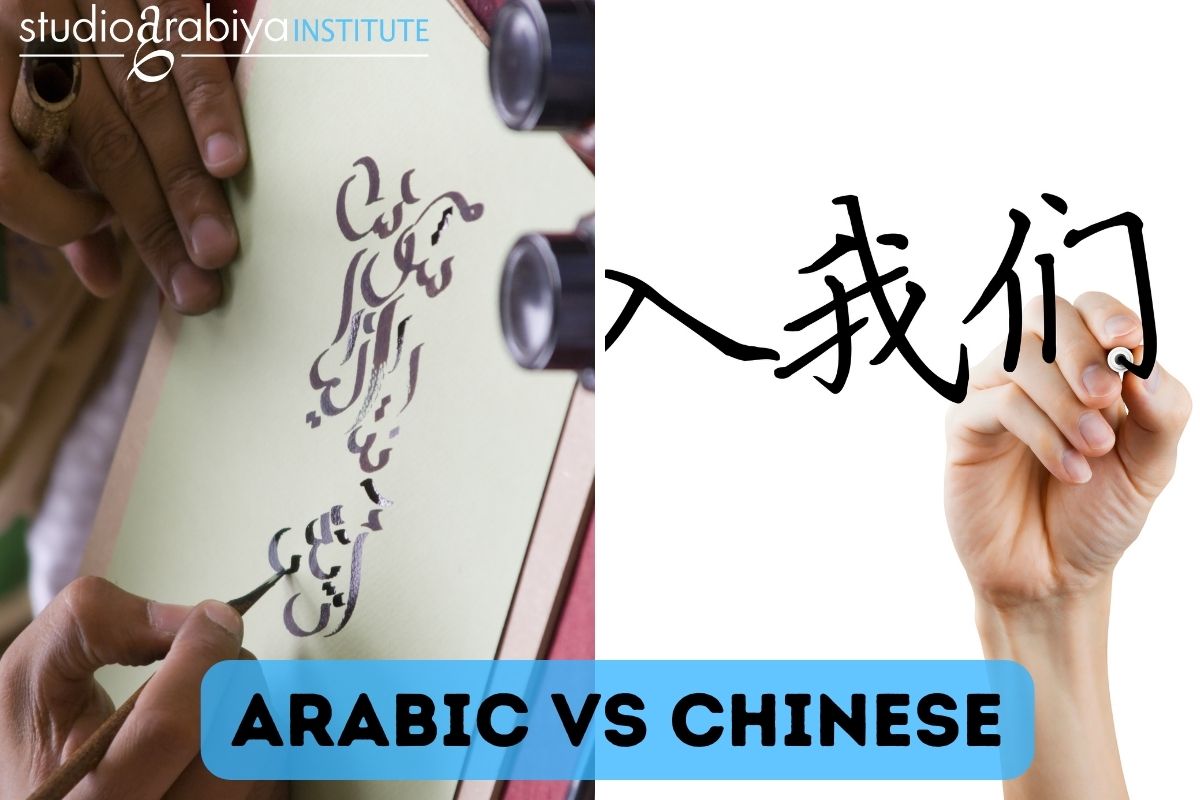 Here’s a list of the hardest languages to learn and as you can see, Chinese is number one on the list then followed by Japanese then Arabic.

Why is learning Chines so hard?

When comparing chines Grammar and Arabic Grammar, you will find that chines grammar is much easier to learn.

Actually, when students who learned the two languages were asked about the difficulty of the grammar, they said that Chinese is easier because unlike the Arabic language it doesn’t differentiate in gender, and to form plural you will just add “many”

The Chinese Pronunciation is what makes it really difficult because it’s a tonal language, for example, the same syllable changes its meaning depending on the tone of pronunciation. Different tones mean different meanings.

A student once wrote “After a year and a half of studies, I doubt I’ll ever reach the point where I can reliably execute tones more than 50% of the time,”

Also, the learners of the Chinese language say that its writing system is really difficult to learn. They form the meaning of a word by changing or adding to character roots. To be able to read you must memorize around 4000 letters.

Additionally, you need to learn how to differentiate and memorize the shape of the letters, because many of them are alike.

A learner wrote: “There are so many characters to learn with certain stroke orders and the tones of PinYin are my absolute worst nightmare.”

Another thing to add is that Chines has many dialects like Mandarin and Cantonese. And both of them are completely different, but Mandarin is spoken by the majority, and also Cantonese speakers speak it as a second language.

This makes Mandarin the official language of China.

What is difficult about learning Arabic?

The difficult part in learning the Arabic language is its grammar.

The Arabic grammar is complex: well, it is kind of hard, but it is the same thing as any other language, each language has its complex grammar. In the beginning, it will be hard but as you start to understand its rules you will learn it fast.

The Arabic alphabet and pronunciation: the pronunciation of the alphabet and its writing changes depending on where it is in the word. Plus, it’s completely different from the English alphabet. Perhaps that’s why people say that Arabic is a hard language to learn.

When the learners were asked about the difficulty of learning Arabic, they said that Arabic grammar is the hardest thing about it. The words have what is called roots and they change depending on the vowels placed on each letter.

Furthermore, the word differs based on gender, dual and plural. The gender of the person you are talking to or about plays a major role. Additionally, some may find that learning the concept dual is really difficult as it doesn’t exist in many languages. Even the native speakers find It hard to learn the Arabic grammar.

When it comes to the Arabic writing system most of the learners said that it looks hard but actually its not hard to learn at all. However, you should know that the Arabic letter changes its shape according to its place in the word.

Another thing to know about Arabic is that Arabs don’t use Modern Standard Arabic (MSA) in their daily life. It is only used in newspapers, radio, TV, formal writing, and in schools. But when Arab communicate which other, they use what is called colloquial Arabic.

The dialect changes from a country to another, therefore you should decide which dialect you want to learn and after you learn the basics of MSA start learning the dialect you like.

Which one should I learn Arabic or Chinese?

Here’s a comparison between the two languages that will help you make up your mind.

If you still have any questions visit our website Studioarabiyaeg.com