What is The Best Arabic Dialect to Learn?

The Arabic language is one of the most spoken languages around the world with more than 350 million speakers. However, it has many dialects, so which one is better to learn, let’s find out.

As a beginner when you ask about the best dialect to start with many people will suggest that you learn the modern standard Arabic (MSA) first then learn the dialect that you find more interesting.

But what is the modern standard Arabic? And why do they suggest that you learn it first? Well. Modern Standard Arabic is one that is used in formal writings, academic research, books, and formal speech.

However, the MSA is not spoken by Arabs, they communicate with each other by their dialect. Therefore, you may find many learners say that you should just skip it and learn the dialect you want right away.

What is the difference between modern standard Arabic and dialects?

1-     MSA grammar is complicated, while dialects don’t use that complicated structure. The dialect’s grammar is much easier and simpler to learn.

2-     The pronunciation of some letters may differ from one dialect to another.

Now to understand why the Egyptian dialect is the best to learn, we will first discuss the different types and where you will find them.

What are the different Arabic dialects? 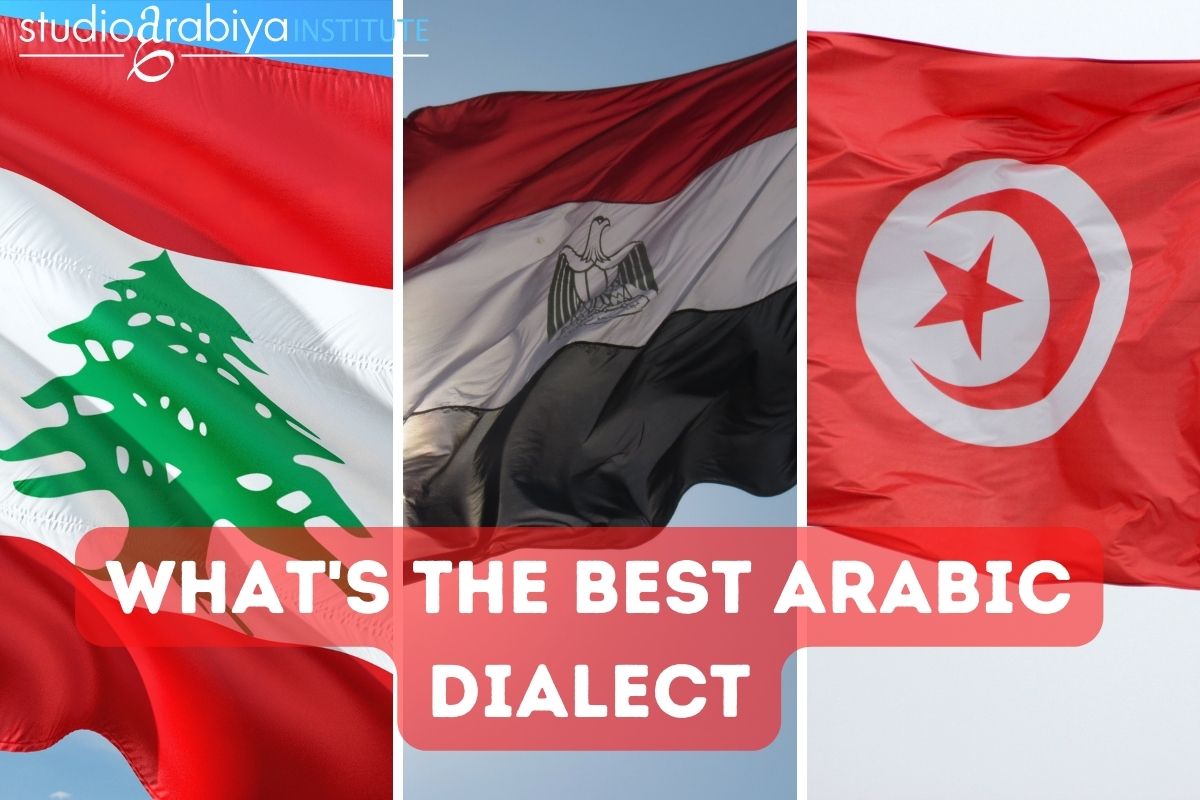 Here are the main Arabic dialects:

It’s spoken in Egypt and there are more than 100 million people who speak it, while most other countries understand it easily. Why? Because it is the dialect used in media, films, tv shows, and programs. Also, it is the number one studied dialect because it is easy and fun to learn. Plus, there are many learning resources out there.

If you only have the time and energy to learn one dialect, it absolutely should be the Egyptian Dialect. It’s the easiest to learn out there, everyone understands it (which can’t be said about any other dialect), and the abundance of both offline and online Egyptian media makes it super easy to find good, enjoyable content in it.

Plus, Egypt is the largest Arabic country by population both in and out of the country, and you can find Egyptians in almost every single country and even every large city in the world, so if you are looking for friends to practice with them offline, you will have much better chances with the Egyptian dialect than any other dialect.

It is also called Khaliji Arabic, with more than 36 million speakers in the Persian Gulf region like Kuwait, Bahrain, the United Arab Emirates, Qatar, parts of eastern Saudi Arabia, southern Iraq, southern Iran, and northern Oman. One important thing to keep in mind is that Gulf Arabic has many dialects inside it, not all those countries speak the same dialect.

The difference is seen in the accent, grammar, and vocabulary. And it is not a slight difference the people from two different countries might not be able to understand each other. The best thing is that most people from the Gulf also speak good English, so they will be able to converse with you in both languages back and forth pretty easily.

There are 3 million native speakers of Hassaniya Arabic, and it was originally spoken by the tribes of the Beni Hassan Bedouin. You will find it in the North African part of the Arab world.

This means that people from different countries like Algeria, Libya, Morocco, Mauritania, Mali, Niger, Senegal, and Western Sahara speak it.

However, it’s kind of hard to learn this dialect, especially for new learners, and most arabs outside of the countries that speak it have a difficult time understanding it as well.

There are more than 21 million native speakers of Levantine Arabic. It is spoken in Syria, Jordan, Palestine, and Lebanon. It’s considered the second most popular and the second easiest to learn dn understand dialect after the Egyptian dialect.

This dialect is spoken in Morocco, Algeria, Tunisia, Libya, Western Sahara, and Mauritania, with around 70 million native speakers. The Maghrebi dialect is also called Derja meaning to rise by step. The language is a combination of French, English, and modern standard Arabic.

It is found in parts of Syria, Iran, southeastern Turkey, and Iraq. It is a combination of the Arabic language, Persian, and Turkish. There are many differences among the dialect speakers which makes it a really hard dialect to learn.

It is spoken in Sudan with more than 17 million native speakers. This dialect is close to Hejazi Arabic in its pronunciation.

This Arabic dialect is spoken by more than 14 million native speakers in Hejaz. It is divided into two smaller dialects urban and rural that change across city and country lines. Urban is spoken by the people in Jeddah, Mecca, and Medina. While rural dialect is spoken in the Bedouin tribes of the rural areas.

Yemeni Arabic is spoken by 15 million speakers, and it is found in Yemen southwestern Saudi Arabia, Somalia, and Djibouti. This dialect is subdivided into smaller dialects.

What is the best Arabic dialect to learn?

The answer to this question is decided by you; listen to the different Arabic dialects and see which one appeals to you more. Listen to songs, watch movies or videos to decide.

However, it is a good idea to start learning Modern Standard Arabic first which will be understood by all the Arabic speakers around the world. Then you could learn the Egyptian dialect as it is widely used by the media. That’s if you don’t have a specific goal for learning the language, but if you plan on traveling to an Arab country then you better learn its dialect, but you can also get away with speaking the Egyptian dialect in almost every arab country because the Egyptian media’s popularity made it so that almost every other arab country can understand Egyptian Arabic pretty easily.

The most common Arabic dialect that people use or learn is Egyptian Arabic. Egyptian Arabic is the Arabic used in Egypt. And most Arab understands it because Egyptian movies and TV series are very popular, especially since Egypt had like a half-century being the only Arab country with movies, TV shows, and even Radio, so every other Arab grew up watching Egyptian media, which means that you can use it in any Arab country. So, if you are a non-Arabic speaker then this might be the easiest dialect to learn.

Which Arabic dialect is the easiest to learn?

There is no such thing as an easy dialect to learn, the answer differs from one person to another. For example, one may find the Egyptian Arabic fun and interesting while someone else might find it hard to learn.

However, there are some dialects that have many learning resources and are taught everywhere, like the Egyptian and Levantine dialects.

So, if you want to learn the dialect on your own and online then it is better to choose the Egyptian dialect or Levantine dialect.

There are no easy or difficult dialects, the key to answering this is to know why you want to learn Arabic and which dialect you prefer. For example, if you are learning the Arabic language to travel to Egypt then you should learn the Egyptian dialect.

What is the most useful Arabic dialect to learn?

The Egyptian dialect is the most common dialect used and learned around the world because it’s easily understood by other Arab countries.

In the end, if you still have any questions visit our website Studioarabiyaeg.com